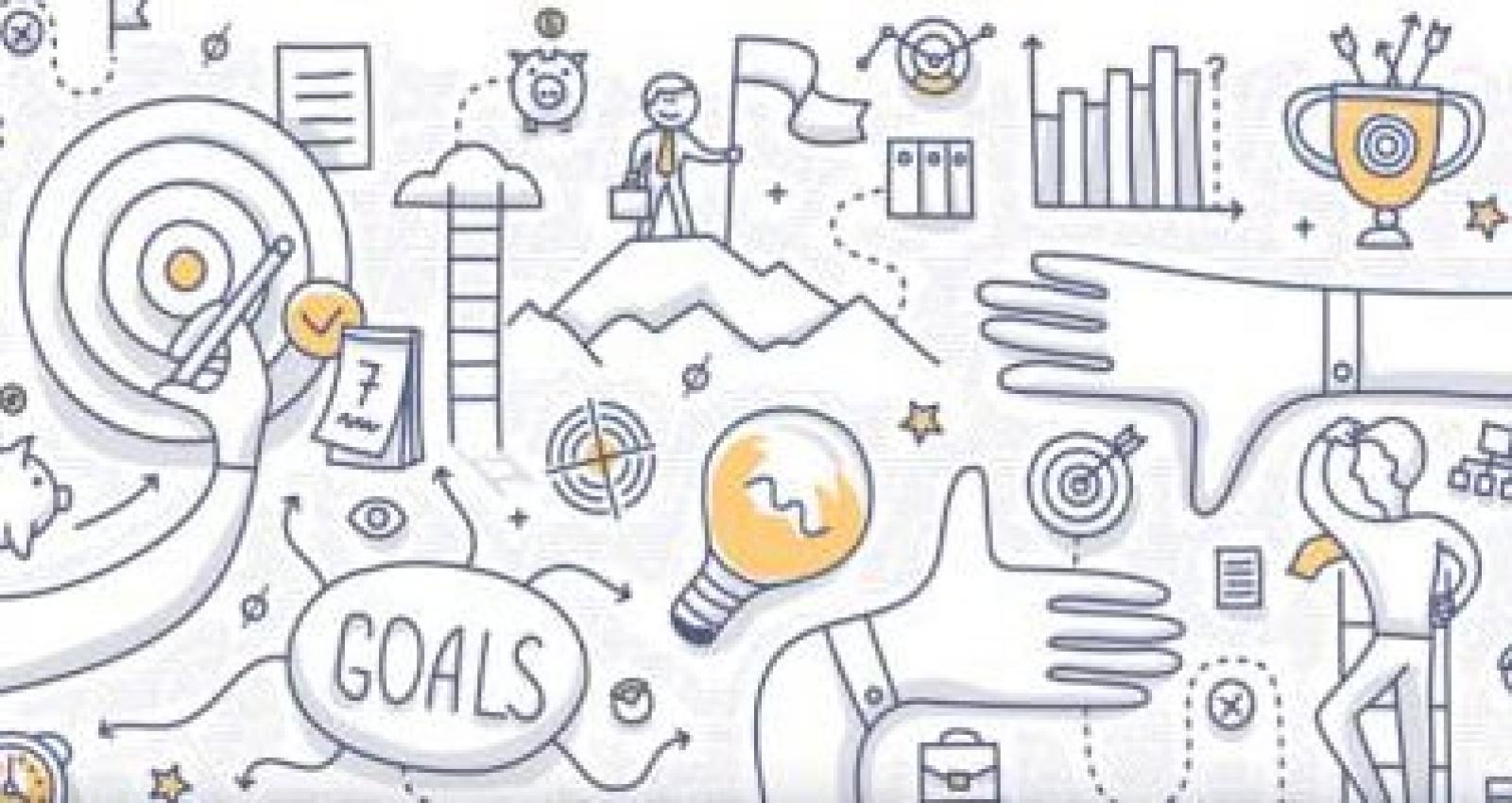 In line with our mandate to review the World Bank Group’s performance, IEG conducts an annual review that tracks the Bank Group’s progress on achieving its development objectives.

First, it is important to understand what the IEG report is about. Unlike traditional annual reports, which largely report on loans, revenues, expenses and other topline performance trends, IEG’s annual review looks at development outcomes – the extent to which World Bank Group projects and country strategies meet the development objectives that they set out at the onset. The latest report aggregates performance data on World Bank Group projects completed during FY13-15 and country strategies during FY12-15.

Although World Bank Group project appraisal documents may be notoriously long and detailed, one sentence – the “project development objective” – defines each project’s goals and lays the foundation for how IEG and World Bank Group project teams report on performance.  This statement of the objective becomes key language in the legal agreement between the Bank and the Borrower to implement the project, and, when a project closes, the team reports on the extent to which this objective was achieved. Using a standard methodology, IEG validates each completion report and the associated ratings, and adds the resulting data to its longitudinal dataset.  IFC projects go through a similar process, and IEG reviews a sample of closed IFC projects.

So what did we find?

For projects of the International Bank for Reconstruction and Development (IBRD) and the International Development Association (IDA) closed during FY13-15, performance remained essentially stable. (Explore these data here.)  The share of projects with outcome rated moderately satisfactory or above (MS+) was 72 percent for the FY13-15 group and 70 percent for the FY10-12 group.  Both were below the FY17 corporate target of 75 percent.  The volume-weighted share of MS+ rose from 81 percent for the FY10-12 group to 87 percent for the FY13-15 group, both of which exceeded the FY17 corporate target of 80% MS+ projects weighted by volume.  This improvement was driven by the good performance of a very small number of large-volume projects. The 15 largest-volume projects in the FY13-15 group accounted for less than two percent of the projects in that group but almost a quarter of the total volume, and all 15 were rated MS+. 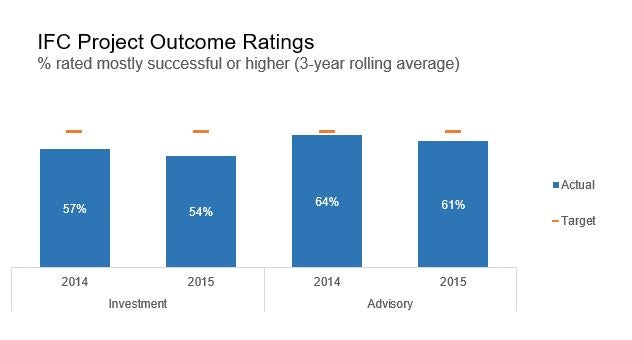 The report also aggregated findings from IEG’s assessments of Completion and Learning Reviews of World Bank Group country strategies. With 66 percent rated MS+ on country development outcomes during FY13-16, performance remained below the FY17 corporate target of 70 percent. Lower performance was associated with poor results frameworks and as well as overambitious objectives.  Higher performance was associated with stronger country capacity as measured by CPIA rating and similar indicators.

The Results and Performance of the World Bank Group report aggregates existing data (rather than collecting new data), so this report often raises more questions than it answers. IEG uses these questions to plan upcoming in-depth evaluations.

What questions does the 2016 Results and Performance of the World Bank Group report bring up for you?  Let us know in the comments below.

Read the 2016 Results and Performance of the World Bank Group

Xiaoxiao is a consultant for IEG's Human Development & Corporate Programs Unit. She has extensive experience in evaluation, data analysis and visualization, and education in international development. 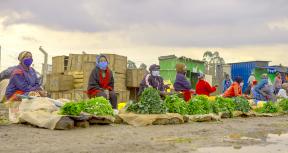 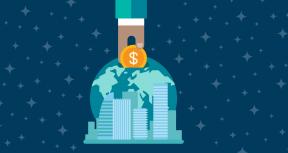 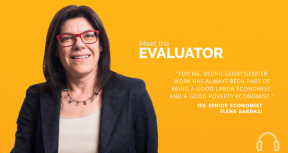 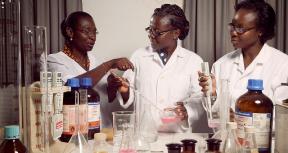 In my opinion the World Bank and others are not achieving anything.All World Bank included who spend heavily on constructions regularly are missing the elephant in the room.The loss owing to frauds in Govt. audited constructions has reached more than US $ 4 Trillion a year in 2008 according to Transparency International.10-30% of the project cost. There is no proper correction mechanism yet.In that context,these and other similar reports have no value.

The least is to implement the GOPAC Position Paper 2015 titled Building on sand to originate a correction mechanism,to salvage the losses and make constructions cleaner

Thank you for your response,…

Thank you for your response, and indeed it is important to read any report with a clear understanding of the questions that can or cannot be answered by the underlying data. A primary source for IEG’s annual review of the Bank Group’s results and performance is self-evaluation ratings of World Bank Group projects, and achievement is defined in terms of the extent to which the stated objectives of a project were met. The World Bank Group’s Integrity Vice Presidency (website http://www.worldbank.org/en/about/unit/integrity-vice-presidency), however, investigates and pursues sanctions related to fraud and corruption in World Bank Group-financed projects, and publishes an Annual Report which may be of interest. The most recent is here: http://pubdocs.worldbank.org/en/118471475857477799/INT-FY16-Annual-Upda…. An example of previous IEG work related to anticorruption is the 2007 report World Bank Country-Level Engagement on Governance and Anticorruption, available here: http://ieg.worldbankgroup.org/evaluations/world-bank-country-level-enga….

I fully understand that you…

I fully understand that you do have guidelines,mandates etc.So many other corruption fighting NGOs do have all that.That is why they continue to write about corruption losses in the construction industry .The fact on the ground is, there is no proper auditing system atleast for Govt.funded constructions. That is why GOPAC suggested to have a Technical Audit in addition to the present Financial.

Since World bank spends lot of money on constructions,where considerable amount is lost owing to corruption,I feel they also should think of a proper correction mechanism for construction to make same cleaner.Writing about corruption losses has not worked in the past and not going to in the future.

World bank is doing its best…

World bank is doing its best,but my concern is ,weak audit trail.Just for example,billions of money are given to Kenyan government.How much end up lost at the county level? I bet almost 50%. World bank need to put tough measures on corrupt governments.Otherwise,fight against poverty eradication will be another cancer phenomena.

I do not know why you all…

I do not know why you all are missing this one.The loss owing to frauds in audited Govt.constructions has reached US $ 4 Trillions per year in 2008,according to Transparency Internationals.It is continuing at a rate of US $ 7.61 millions per minute.Introduce an additional Technical Audit as suggested by GOPAC in 2015. Spend a minute loss as CSR to bring a Technical Auditing mechanism. Salvage this avoidable loss of US $ 4 Trillions per year. You can do a lot to eradicate GLOBAL POVERTY with US $ One Trillion per year(25% of the avoidable loss)