Tight government fiscal positions in low-income countries justify the search for private sector solutions to support much needed investments- but the enabling environment in these countries must improve first to attract the private sector.

With its focus on remedying the obstacles that block private sector solutions ... nowhere is the creating markets agenda more urgent today than in low-income countries.

Under the Maximizing Finance for Development (MFD) objective, the World Bank Group (WBG) has outlined a new approach – the Cascade-- that prioritizes private financing and sustainable private sector solutions to help countries achieve the Sustainable Development Goals by 2030 while economizing on scarce public finance resources.

Implementing the Cascade Approach in low-income countries is particularly relevant for at least three reasons:

Low-income countries face a growing debt burden.  A recent IMF report Macroeconomic Developments and Prospects in Low-Income Developing Countries[1] warns about lower-income nations slipping into new debt crises, in particular countries in Africa. This trend is driven by both the absolute debt levels and by the composition of these debts since “much more of the debt is on commercial terms with higher interest rates, shorter maturities and more unpredictable lender behavior than traditional multilaterals”. [2]  As a result, debt burdens have increased by 13 percentage points of GDP in the past five years for low-income countries, according to the IMF. Of the approximately 40 low- and lower-middle-income countries in Sub-Saharan Africa, the number of those with debt-to-GDP ratio above 50 percent increased from about five in 2012 to more than 15 in 2017[3].

Estimates of investment needs in developing countries range from $3.3 trillion to $4.5 trillion per year, mainly for basic infrastructure, food security, climate change mitigation and adaptation, health, and education.  Given the scarcity of public funding, developing countries face an annual gap of $2.5 trillion (Figure 1). Up to 70 percent of the investment gap could come from the private sector; however, reaching this potential implies doubling private sector participation from its current $0.9 trillion to $1.8 trillion, and will still leave an estimated $0.7 trillion gap per year. 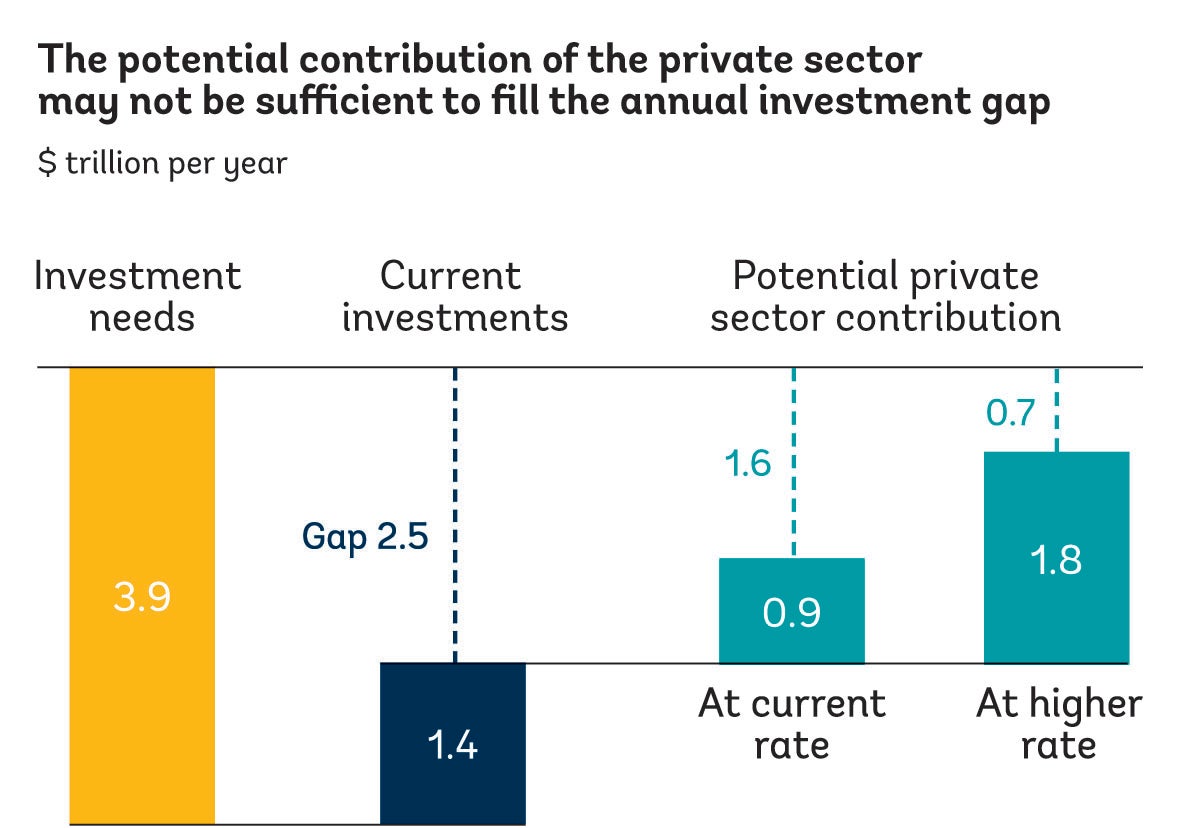 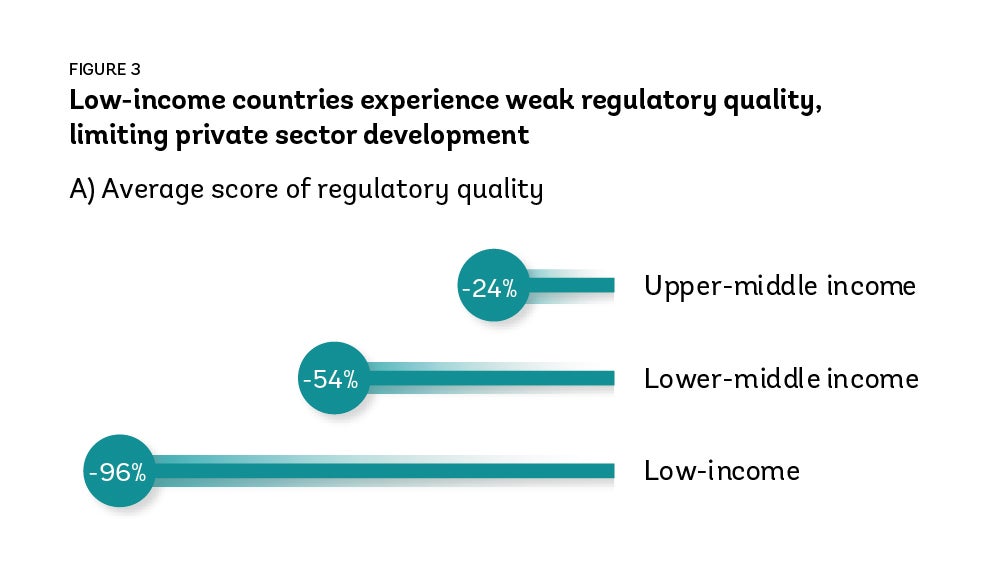 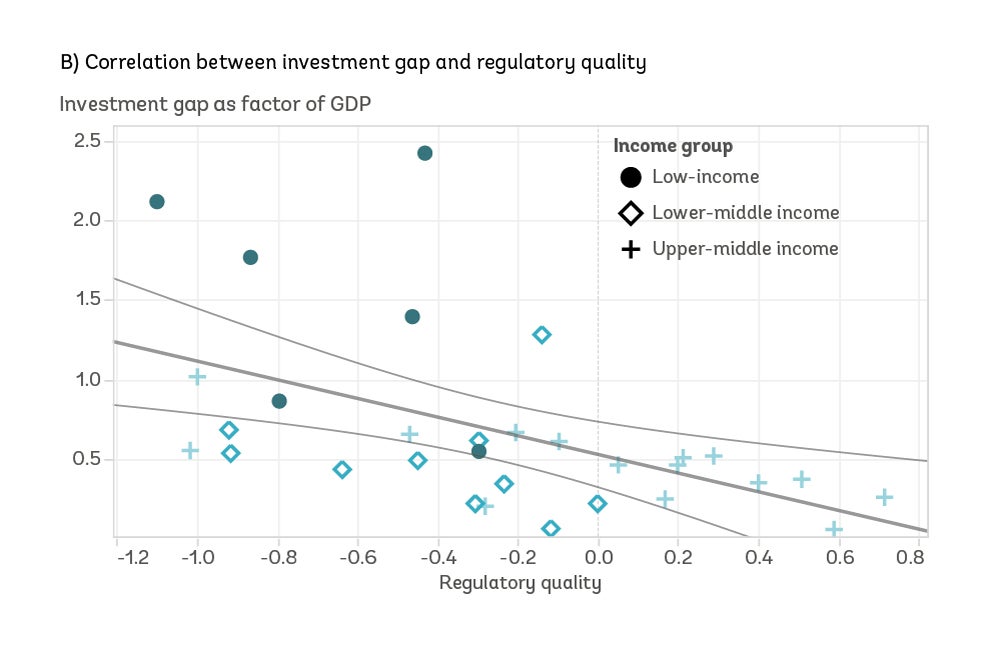 How Realistic is a Doubling of Private Sector Funding?

Private sector investment in SDG-related sectors is relatively low. Only a fraction of the worldwide invested assets of banks, pension funds, insurers, foundations and endowments, as well as transnational corporations, is in Sustainable Development Goal (SDG)-relevant sectors. Their participation is even lower in developing countries, particularly the poorest ones. Recent IEG evaluations of SDG-relevant sectors reveal the low share of IFC and MIGA involvement and by implication the scale of the private investment effort ahead (Table 1).

The recent uptick in private investments in infrastructure in low- and middle-income countries could be a sign of recovery. In 2017, private infrastructure investments increased by 37 percent from their 2016 levels – yet this is the second lowest level of investment in the past 10 years and is 15 percent lower than the five-year average. According to the 2017 PPI database, the increase over 2016 levels is attributable to a few megaprojects, such as two high-speed railway projects in China (US$6.8 billion) and Indonesia (US$6.0 billion).

The Case for the Cascade

The evidence above points to the significance of the “Cascade Approach” as a tool to implement the Bank Group’s MFD objectives, with its focus on remedying the obstacles that block private sector solutions and help client countries create markets.  Remedies include sound regulatory rules built on solid legal frameworks; the expectation that such rules be adhered to, contributing to building trust among market participants; and physical access to markets and financial services.  Nowhere is the creating markets agenda more urgent today than in low-income countries.

Governance score - Estimate of governance measured on a scale from approximately -2.5 to 2.5.  Higher values correspond to better governance.

Jacqueline Andrieu
Evaluation Officer, IEG Private Sector Development Unit
Jacqueline Andrieu is an Evaluation Officer in IEG’s Private Sector Development Unit. Her work spans a broad range of issues within the intersection of private sector and sustainable development; she has played a key role in major evaluations addressing issues such as trade facilitation, pollution management, financial inclusion, SME finance, forest management and ICT. Jacqueline is a specialist in evaluation analytics and regularly advises and trains teams on portfolio and case analytics to facilitate the exchange of ideas, best practices, and relevance and consistency of approaches. 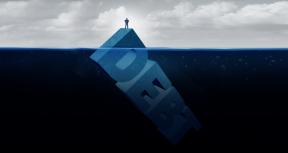