This IEG Project Lesson is based on IEG’s Assessment of the World Bank’s Emergency Food Crisis Response and Agriculture Relaunch Project in the Central African Republic – a program executed by WFP and FAO amidst a protracted security crisis. 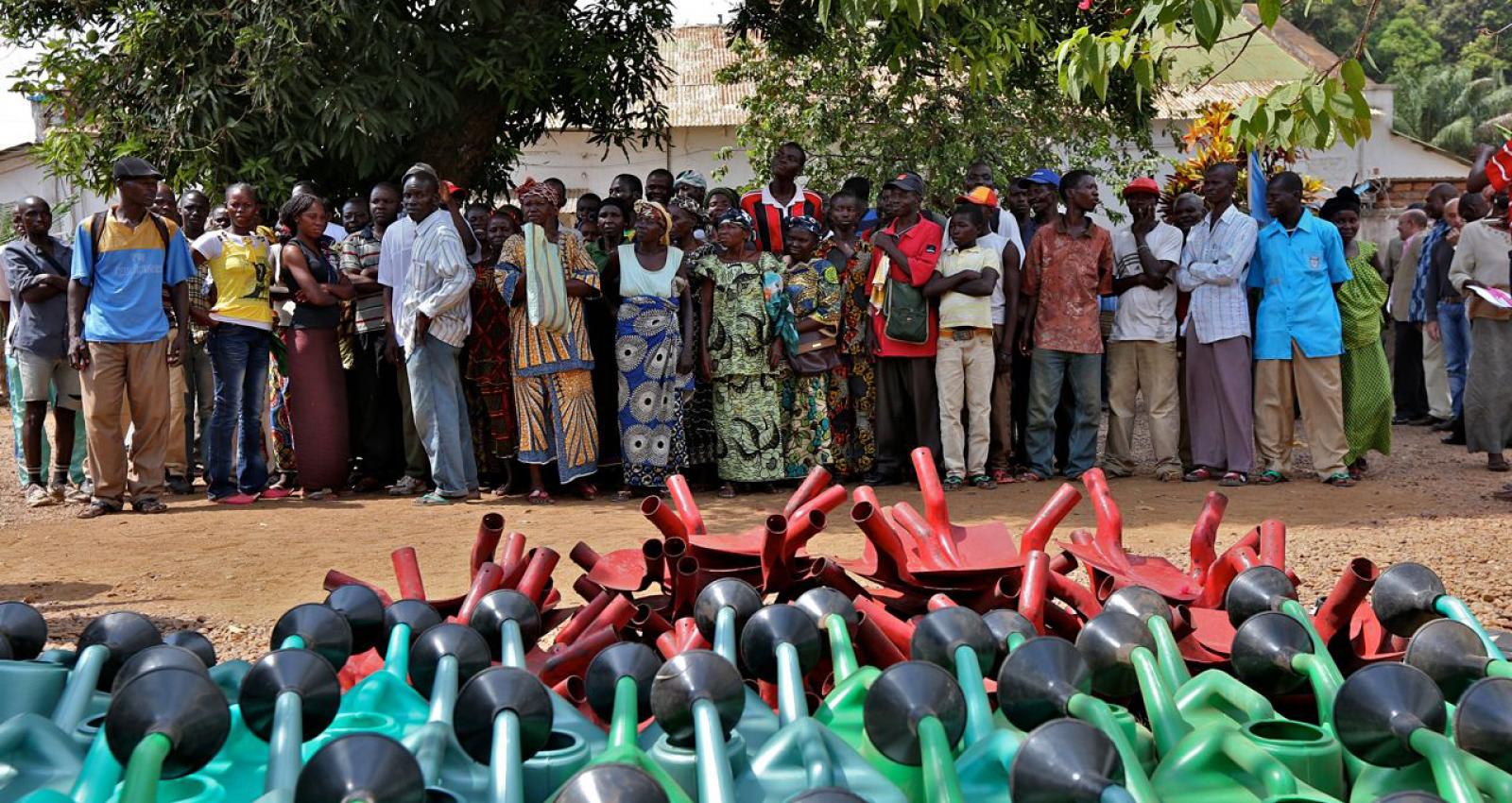 Early implementation lessons from IDA-financed projects executed by WFP and FAO can help inform the way the Bank engages partners to achieve more effective outcomes in FCV contexts, that align with the Bank’s competencies and goals. This brief captures the lessons from evaluating the World Bank’s Emergency Food Crisis Response and Agriculture Re-launch project in the Central African Republic.  While rated unsatisfactory by both the World Bank and IEG, it has the potential to yield rich lessons relevant to future emergency response programs.

Around 20 percent of the world’s poor live in fragile, conflict, and violent (FCV) areas and this number is expected to double by 2030. As a result, global attention and development aid is increasingly focused on supporting prevention and early response to address the drivers of conflict. To this end, the World Bank Group’s International Development Association or IDA has committed to doubling its financing for FCV areas. At the same time, due to restrictions and security concerns that limit international donor access to the worst hit areas, the Bank is increasingly relying on UN agencies and civil society to help deliver critical emergency aid.

Between 2006 and 2016, the UN’s World Food Program (WFP) and Food and Agriculture Organization (FAO) executed US$420 million of IDA-financed projects in fragile settings. And while the Bank is taking steps to formalize these arrangements—for example, through a first-of-kind joint strategy between the Bank and WFP signed in March 2018—to date, there has been no comprehensive review of these specific partnership and execution modalities apart from IEG’s Review of the Global Food Crisis Response Program.

Since late 2012, CAR has experienced massive armed clashes and intercommunal violence (primarily between Christians and Muslims), creating an unprecedented humanitarian crisis that displaced over 25 percent of the country’s population. Multi-Sectoral Rapid Assessments launched by FAO and WFP indicated that, following the crisis, about 1.4 million persons were food insecure, that persons in conflict affected areas had access to only one meal per day, and that there would not be enough seed to plant for the next planting season. Food prices had been on the rise owing to instability in the northern part of the country, aggravated by production taxes, levied by rebels, which were discouraging market sales and reducing producers’ assets. Retaliation against Muslims compounded these problems because many of the Muslims who fled were truck drivers who took goods to market and shopkeepers who left behind stores that were looted and torched. The crisis also decimated the supply of seed, livestock, and farming equipment for much of the affected population.

The Bank paused disbursements, cancelled—by request from the government–all undisbursed balances, and—in less than three weeks—prepared an emergency response project executed by WFP and FAO to “protect and rebuild livelihoods and human capital, particularly of children, and to relaunch the productivity of the country’s agriculture sector.” These were ambitious objectives for an emergency response project designed to be implemented over 18 months.

The project also tested FAO’s ability to procure and distribute quality seeds and farming implements during a time when supply chains had been completely disrupted by the war. The Bank’s project was based on a theory – that warrants further study - known as “Seeds for Change.” It posits that food distribution should be coupled with seed distribution in order to prevent returning populations from selling or eating distributed seeds, thereby eroding chances for a more sustained agricultural recovery. The pairing of seed and food distribution is timed to coincide with the lean season, when food stocks have been exhausted, and just before planting season.

But in an emergency setting, the organizational infrastructure needed for seed procurement and distribution, and for supporting technical assistance, tends to be weak or non-existent. While FAO supported the procurement of seed from international sources, the seed was of inferior quality and it was distributed late, after the planting season. Seed storage was a major weakness of the project, with few planned warehouses completed. Market gardening was the only area of observed success among project activities implemented to rebuild the agriculture sector. Farmers’ groups in MBaiki, Bossembele, and Boali took up gardening for consumption and surplus marketing, but they faced several obstacles including inferior equipment, difficulties in seed storage, and lack of technical assistance. FAO was also unable to reach the most vulnerable farmers since distribution was done through legal, dues-paying farmer groups. Many cooperative arrangements had been fraying over time, with the elderly and the poorest tending to participate in more informal arrangements.

Monitoring was insufficient because of the layers of execution necessary to deliver aid in hard-to-access areas. Targets were not based on an underlying sociological understanding of behavior.  Indicators measured only the supply of the aid, not its use or impacts. Monitoring also suffered from a lack of ingenuity regarding the use of conventional and modern technologies designed for tracking food and seed distribution, dietary outcomes, or well-being. For example, dietary assessments could have been conducted within schools and hospitals by trained specialists, and rapid market analyses following harvest season could have revealed the relative outcomes of the seed distribution. This also affected safeguards, which identified environmental challenges that were more appropriate for a large scale agriculture project rather than social considerations that could lead to conflict risks in a large scale feeding program.

WFP’s Evaluation of WFP Policies on Humanitarian Principles and Access in Humanitarian Contexts, published in May 2018, corroborates these lessons. The evaluation identified insufficient WFP field presence for monitoring as a problem in almost all contexts visited, despite investments in third-party monitoring, because third-party monitors often lacked the information about WFP’s activities necessary to monitor effectively. In addition, data was mostly quantitative and not always easily triangulated.

Read more about the project’s objectives and design.

Standard Agreements between World Bank clients and UN executing agencies can facilitate success if they include a common vision about intended objectives, a clear and achievable results framework and related outcome indicators, and a clear articulation of how risks to the environment and social framework will be monitored, reported on, and managed. In CAR, the Bank over-relied on UN reporting mechanisms after the humanitarian crisis, and did not fulfill its supervision responsibility, undermining opportunities to address ongoing project implementation challenges.

Efficient seed procurement for conflict-affected countries is complex owing to disruption of trading networks and normal supply and demand signals: the recruitment and funding of a technical team needs to be a prior condition of project effectiveness. The experience in CAR shows that procuring the correct seeds for specific geographic locations and their associated soil and agro-climatic conditions is technically demanding and time consuming. It also requires deep local and regional knowledge of supply and demand. Upstream diagnostic work on effective seed procurement (quality and realistic timeframe for procurement), including the availability and quality of technical support, is needed. This should involve a candid review of the Bank’s existing partnerships and ways of doing business (such as FAO execution) but also fine-grained institutional analysis and mapping of government technical services as well as capable partners in the NGO community (some NGOs are much more capable than others and they need to be identified before crisis hits). The few dispersed agricultural technical services that remained after crisis, including many well-trained and capable agents, should have been better incorporated into the emergency response.

Emergency food security operations do not necessarily require food agency coupling (such as WFP and FAO). Depending on the stage of recovery, emergency operations may be better served by pairing a food agency with a social agency (such as UNICEF and the Red Cross) to achieve more effective targeting and service delivery for the most vulnerable populations.

Post-conflict emergency assistance in highly agrarian economies should try to maximize synergies across sectoral operations to optimize the delivery of food aid while laying a foundation for growth of the agricultural sector. In CAR, interviews with United Nations relief agencies and development actors revealed that opportunities were missed after the 2012 coup to link humanitarian interventions with wider development aims, for example, by identifying transport interventions that could have increased market access while achieving stabilization aims. To achieve more effective harmonization, lessons from CAR suggest that aid could have been better coordinated through a multi-donor strategy and funding tool designed to support the recovery while bridging the humanitarian relief–development divide.

Read more about the World Bank’s work to address fragility, conflict, and violence

Lead Image caption:  Beneficiaries in CAR are ready for the distribution of tools and seeds. Image copyright FAO/J. Swolfs.