This brief captures the lessons from evaluating a World Bank project implemented in two cities, Salvador and Feira de Santana, in the state of Bahia, Brazil. 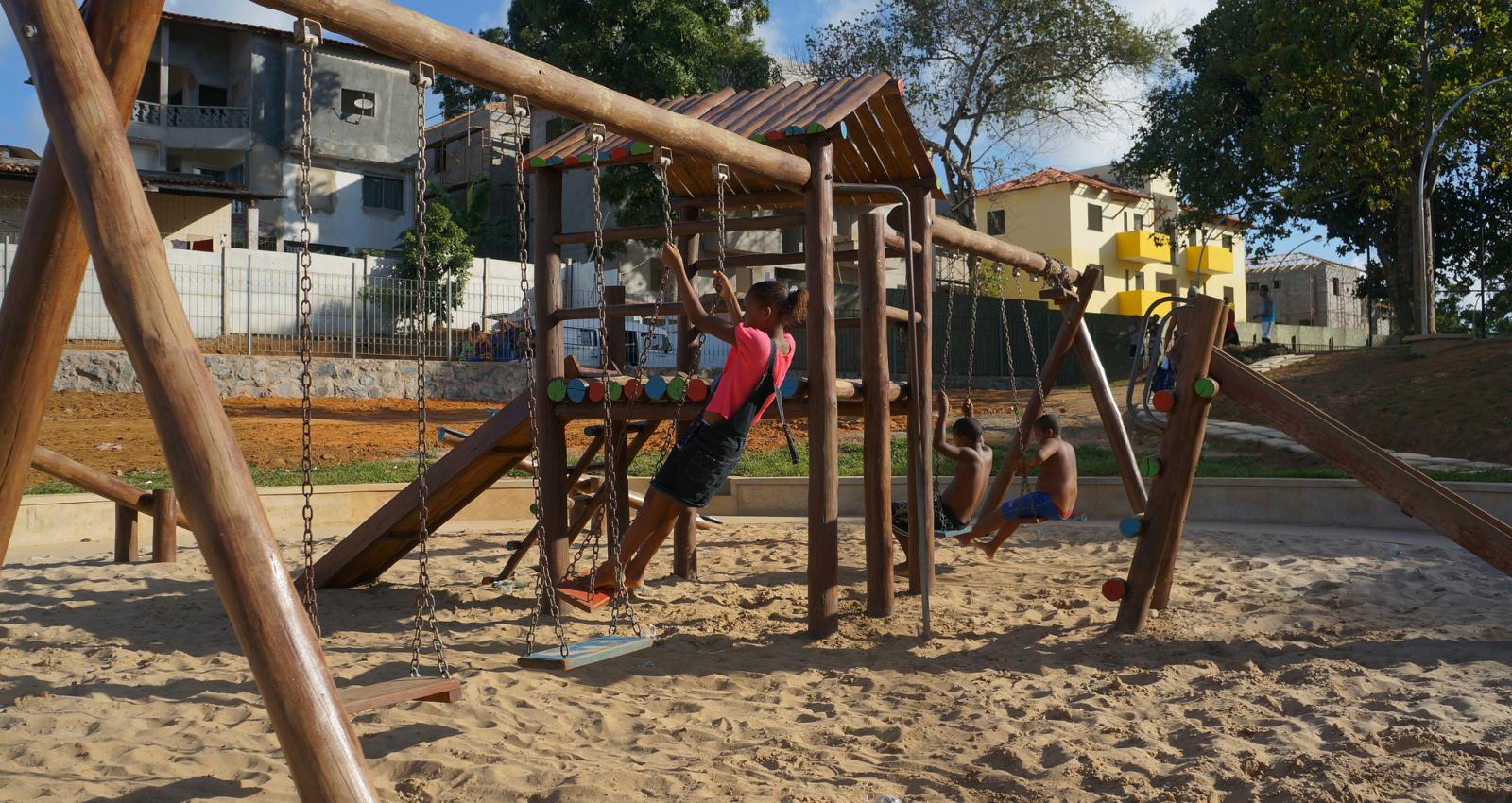 This brief captures the lessons from evaluating a World Bank project implemented in two cities, Salvador and Feira de Santana, in the state of Bahia, Brazil. To read the full evaluation,

Background: The process of upgrading slums in Brazil has evolved

Slum upgrading in Brazil has evolved slowly from slum eradication and relocation of its dwellers to underserved housing settlements in the outskirts of cities, to occasional, partial, municipal upgrades. In the mid-1990s and into the 2000s, internationally financed projects brought integration, participation, social outreach, and institutional development to the slum-upgrading approach in Brazil. The national ProMoradia program was launched in 1995 to help families in situations of social risk to get better housing and a better quality of life. The ministry of cities was created in 2003 to elaborate, coordinate, regulate, and supervise urban development policy at the national level. Comprehensive state interventions in slum upgrading have also been taking place in Bahia and, more specifically, in the Metropolitan Region of Salvador.

There were two concurrent national programs for slum upgrading and housing during program implementation. The Growth Acceleration Program (Programa de Aceleração do Crescimento) was launched in 2007. For the first time, slum upgrading was operationalized as a national policy in Brazil, targeting 1.8 million families of slum dwellers. In 2009, the Ministry of Cities launched My House, My Life (Programa Minha Casa Minha Vida; MCMV)—one of the largest social housing programs in the world. Comprehensive state interventions in slum upgrading have also been taking place in Bahia and, more specifically, in the Metropolitan Region of Salvador (the Bahia state capital city). The ProMoradia program, implemented between 1995 and 2007, provided housing improvement for 90,000 families in Bahia, 76,000 of whom reside in Salvador. However, ProMoradia ceased when the Growth Acceleration Program and then the MCMV program were initiated. Some of these interventions were concentrated in a region with more than 3,000 stilt houses in Salvador. Initially, an integrated and participatory approach was developed as a pilot in Alagados settlement, and later the same approach was applied in the Ribeira Azul program to a broader urban region. This program resulted from strong collaboration between different actors such as the Bahia state government, the World Bank, Cities Alliance, the Italian Development Cooperation, and the Association of Volunteers for International Service, and it had a decisive influence on the design of the Bahia Poor Urban Areas Integrated Development Project (VMII).

The Bahia Poor Urban Areas Integrated Development Project stated objective is to “reduce urban poverty in a sustainable manner in the poorest and most vulnerable sections of Salvador and certain other cities in the borrower’s territory by providing access to basic services and improved housing and social support services.”

The project was implemented between 2005 and 2013. Original financing was anticipated to be $82.2 million, including a $49.3 million International Bank for Reconstruction and Development credit and a $32.9 million borrower contribution. Actual costs at completion were $100.85 million.

Read more about the project objectives and design.

The relevance of the project objectives is rated substantial.  The objectives were highly relevant to national and state strategies. Both Bahia’s 2003–20 state strategic plan and the state housing plan for 2010–13 aimed at improving access to land with adequate basic infrastructure and promoting sustainability through social capital strengthening and implementation of productive inclusion programs.

The relevance of the design is rated modest. The underlying project logic adequately links project components to achieve the overarching objective of reducing urban poverty in the targeted area. However, given the size of the investment and the needs of the state, the project’s development objective was ambitious, and the likelihood of reducing urban poverty was overestimated. The integrated approach concept, which relied partly on the successful provision of both physical and social components, was considered critical for the project’s sustainability.

The project’s achievement of its first objective—improving access to basic services and housing—is rated substantial. Based on information provided to the Independent Evaluation Group (IEG) team, all works the Bahia government committed to complete at project closure were executed successfully by the time of the project assessment mission. A year after completion, 2,138 households were improved, surpassing the target of 2,000. In addition, the number of households resettled from high-risk areas or unhealthy conditions increased to 1,448. The project promoted a comprehensive and multidimensional (urban, social, and environmental) requalification of neighborhoods based on a broad menu of housing solutions (versus unidimensional solutions, such as in the MCMV program). The quality of housing improved notably compared with the poor housing conditions in which most resettled families had lived, such as stilt houses, semirural dwellings, and shacks.

The project’s achievement of its second objective—improving access to social programs—is rated modest.  Only 41 percent of beneficiaries of social actions were selected from the infrastructure component because works were under way, and beneficiaries were usually scattered in rental homes. The strengthening of civil society organizations and social capital has been central to the approach. The project sought to increase the ability of the targeted population to enhance its income and job-generation opportunities, but the project did not have income or employment-generation targets.

Read more about the project's implementation and outcomes.

The main lessons related to reducing urban poverty in a sustainable manner and providing access to basic services and improved housing and social support services include:

1. Adaptability to local needs, retaining beneficiaries in the territory, and integration between different types of interventions are key features in slum upgrading and social housing. VMII provided a menu of comprehensive and multidimensional interventions (a housing system versus the monodimensionality of MCMV) that can be extended and replicated. Highly participatory processes allowed changes in design and size according to the needs the communities expressed. Retaining beneficiaries in the same territory avoided rupturing the social fabric in local communities and allowed those communities to keep using familiar local services. Housing interventions are integrated well to the remaining areas, both through contiguity and through investments in equipment, infrastructure, and house improvements, thus benefiting both old and newly built areas.

2. Weakness in social service delivery can jeopardize expected outcomes and sustainability. Flexible designs and adequate sequencing of activities might help ensure results. Looseness and low sustainability are common features of social interventions, in which capacity building is difficult to materialize into concrete outcomes, even when resources for social activities are abundant (as in VMII). Lessons from VMII include the following: (i) flexibility at project design and successive prioritization (from participatory diagnostics) to avoid establishing too many fronts at the outset (with gradual enlargement based on results and growing institutional capacity); and (ii) better sequencing of activities, such as the inclusion of slum-upgrading beneficiaries in local social policies when slum-upgrading social work is completed, which implies supporting municipalities to build up capacity to attend them.

3. Adoption of multiphase projects or a programmatic long-term approach in slum-upgrading projects might be appropriate when social capital strengthening is considered necessary to achieve long-term results. Social interventions in one target area, social intervention area (poligonal de intervenção social) Ribeira, outperformed all others, specifically regarding CBO participation in project activities. This is mainly the result of a long-standing presence of state and international institutions—for example, the Bahia State Company for Urban Development (Companhia de Desenvolvimento Urbano da Bahia) and the Association of Volunteers for International Service (Associazione Volontari per il Servizio Internazionale)—through different, sequential projects in this area, which built trust and partnership with local civil society to strengthen its organizations effectively. Stronger social capital also fosters continuity and sustainability (for example, service provision or dialogue with government), which are critical especially in situations of shifting political agendas and lower availability of resources.

4. Appropriate timing in the preparation of slum-upgrading projects is crucial. Studies and diagnostics require sufficient time (though not too long) to avoid frustrating local expectations or hampering integration. VMII preparation took two years, and most works were concluded eight years after project start. Although slum-upgrading interventions are complex and imply a high degree of uncertainty (including in resettlement), a 10-year project completion period is too long because diagnostics become outdated, local expectations are frustrated, project credibility is lost, and a high number of potential beneficiaries vanishes, especially when they are temporarily allocated to social rent arrangements. One consequence of this long project implementation in VMII was the difficulty in attracting housing beneficiaries to take part in social activities, thus jeopardizing the integration of physical and social interventions. Project experience shows that project preparation might develop a clear, realistic indication of target areas, which should not be the subject of political negotiation later. Participatory planning could then be conducted in these areas with beneficiaries to gain their support and consensus, including for resettlement. Physical and social activities should be planned and initiated jointly so that they can support the same beneficiaries and make integration effective.

5. It is important for World Bank project management to ensure that slum-upgrading projects in urban areas are consistent with existing city plans and are integrated seamlessly into World Bank Group sectoral and thematic operations. The design of this project included relevant multisector activities to reduce urban poverty. It envisioned active coordination with World Bank investments in sectors such as education and health. However, no clear institutional arrangements or legal provisions were made to ensure synergies between education and health, which affected the achievement of project components. Although the project followed a series of urban-upgrading projects and promoted a systemic approach that was successful in bringing multidimensional neighborhoods together, it had limitations caused by the project interventions’ lack of adherence to the relevant municipality’s master plan.

Read more about the World Bank in Brazil

About the image: Children play near the Community Center of Pirajá, in the suburbs of Salvador, Bahia. The area has been recently upgraded and features not only a new community center, but also new condominiums. Photo: Mariana Ceratti / World Bank 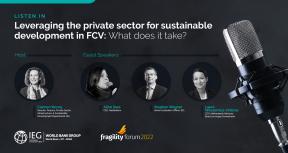