Social contracts matter for development: What can the World Bank do about it?

Social contracts matter for development: What can the World Bank do about it? 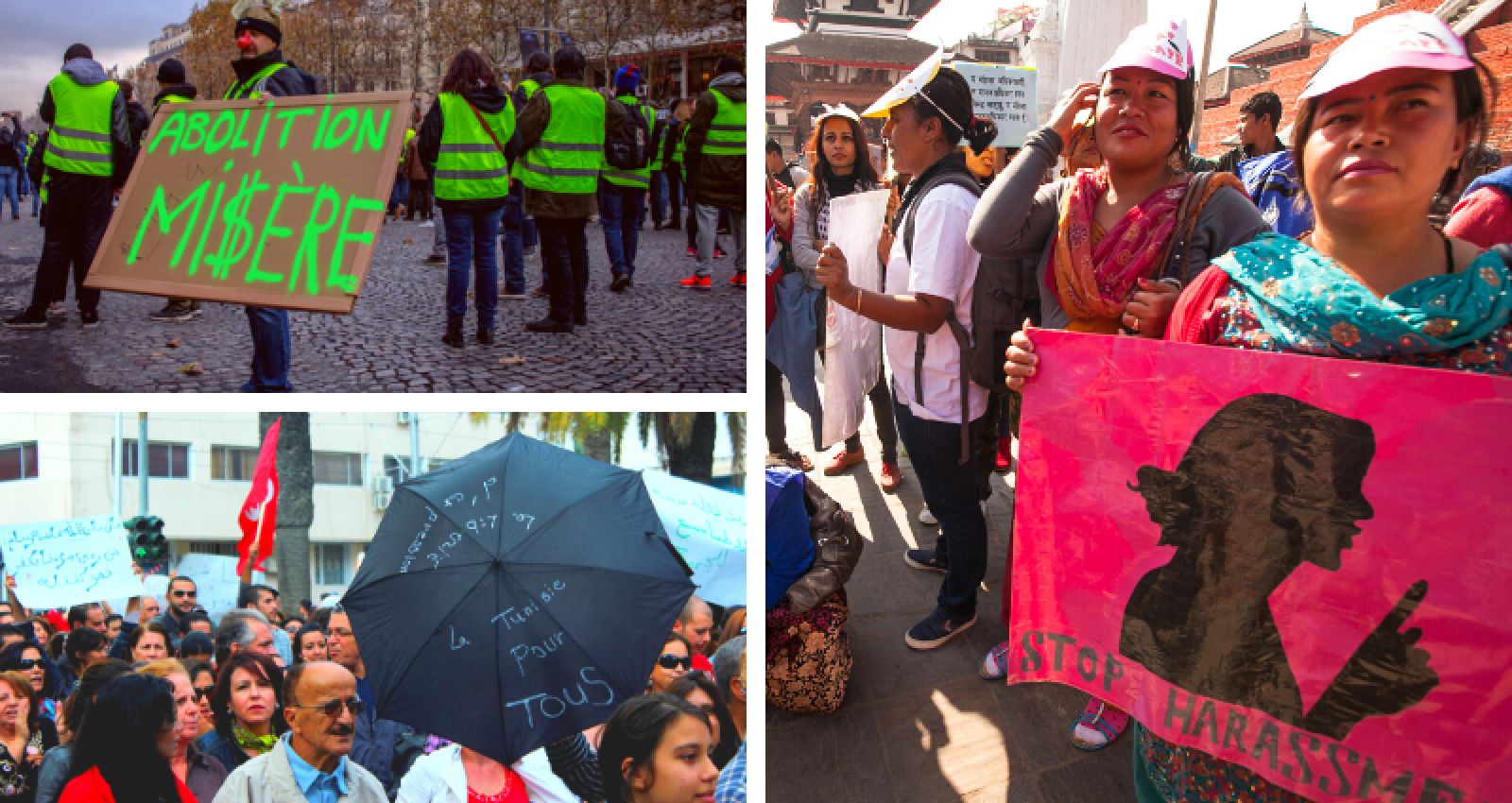 Sometimes development research is ahead of the curve, other times it is overtaken by events. The Arab Spring is one of these episodes that few in the development world had seen coming, the World Bank is no exception. Conventional measures of development, such as GDP growth, Gini coefficient and extreme poverty reduction raised no red flags. Yet, less conventional measures of well-being, such as satisfaction surveys and barometers could have given the development community a hint that widespread dissatisfaction was growing, ultimately erupting in abrupt and intense civic movements.

The World Bank and others ultimately found a key to the puzzle of the Arab Spring in the nature of the Social Contracts in the countries of the region. Many rigorous pieces of research ensued in the World Bank Middle East and North Africa (MENA) region (for example here and here), leading to an unprecedented strategy that made the social contract renewal the fundamental pillar of the Bank’s program in the region. Since then, the World Bank has invested in research on social contracts across regions and contexts (e.g., in Europe and Central Asia, in East Asia and soon in Africa). Two recent World Development Reports  2017 and 2019 and the upcoming strategy for countries affected by fragility, conflict and violence grapple with social contracts related issues.

In a recent evaluation we asked these very questions and we have four takeaways to share:

The evaluation found an increasing use of the social contract lens to explain complex development challenges, such as entrenched inequalities, poor service delivery, weak institutions, and why decades of policy and institutional reforms promoted by external development actors could not fundamentally alter countries’ development paths.  Unequal bargaining power among citizens, the state, and non-state players, offered explanations for phenomena that resist other paradigms such as market failure or government failure.

When strategically disseminated, social contract diagnostics can also build bridges between the World Bank and the societies it studies and serves. The South Africa Strategic Country Diagnostic identified the need for a stronger social contract to overcome the legacy of exclusion. As the study was conducted jointly with thought-leaders in South Africa, and disseminated widely, it served as a platform for rebuilding the relationship between the country and the World Bank.

The World Bank is better able to translate its diagnostics into practice in countries where the social contract is in transition.

When it comes to acting upon the diagnostic to shape country partnership frameworks and the portfolio of activities, we found that the World Bank faced two types of scenarios.

The first is in countries where the social contract is in transition and the Bank is able to align its activities with its diagnostics. In these countries however, the World Bank may not be able to achieve all its stated goals and needs to be doubly cautious to maintain its reputation as an honest broker.

A lot can be learned from the experience of the MENA Region. We found that the MENA strategy’s focus on helping societies transition to a new social contract added discipline to the World Bank’s Regional program, especially at a time when new lending commitments in MENA rose significantly over the last four years from $1.5 billion to $6.4 billion. Very concretely, each proposed operation had to demonstrate that it contributed to social contract renewal and did not reinforce the “old broken” social contract.

Tunisia is a great example of the World Bank’s effort in helping the society renew its social contract, in line with principals laid out in the MENA strategy. These include making private sector jobs resistant to elite capture, bringing informal jobs into the formal economy, targeting lagging regions, and empowering youth and women.

Yet despite the political astuteness of the World Bank’s country team, key reforms that it supports, such as to the pension system or state-owned enterprises, are currently at a standstill or have had to be aborted. Vested interests that may have supported the political transition may not be as enthusiastic about the economic transition. Social contract diagnostics are not a silver bullet and they can pose a risk to the Bank’s reputation.

There are fewer opportunities in countries where the social contract is more stable, but non-lending instruments can provide the Bank with some room to influence.

The second scenario involves countries where there is no internal dynamic to renegotiate social contracts. In these “status quo” countries, the social contract can be fraught, yet static.  In these situations, the World Bank has a very small window of opportunity to trigger the fundamental changes called for in its diagnostic work. Lending tends to be constrained and might reinforce the state’s part of the bargain by strengthening service delivery. By contrast, social contract issues that reinforce society’s capacity to honor its side of the contract, such as citizen engagement or government accountability mechanisms, are less frequently translated into operations, despite SCDs calling for this.

In status quo countries, the World Bank has not yet developed a systematic approach to ensure its lending does not exacerbate broken social contracts, what other institutions call a “do no harm approach”. 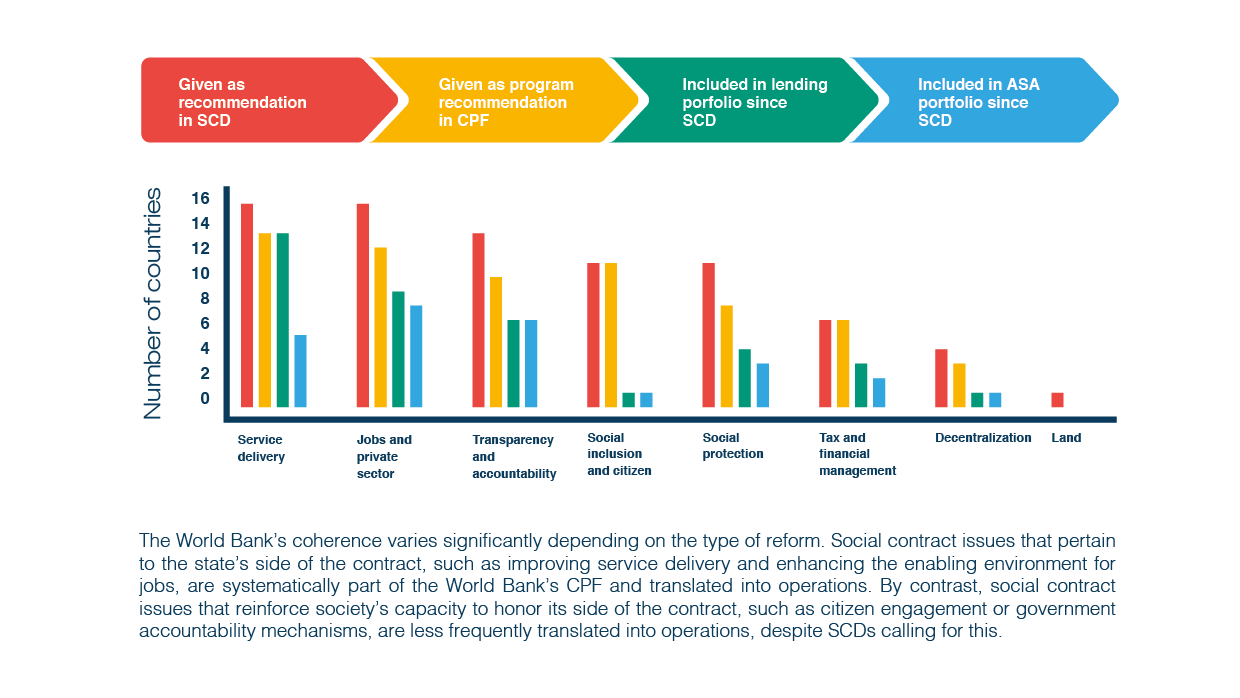 So what else can be done beyond lending?

We found that in some situations, the World Bank has deployed its non-lending activities strategically to create change where lending is not effective. These instruments include analytical work, trust-funded activities, and citizen engagement mechanisms embedded in projects.

Analytical work can be catalytic. For example, a three-year Gender and Social Exclusion Assessment, co-led by the World Bank and Nepali government at a time when Nepal’s social contract transition had not really started, resulted in a landmark publication. The publication demonstrated that any effort to renew the country’s social contract would have to address the historical exclusion of Nepali women and ethnic and cast discrimination. In part as a result of this analytical work, gender and social inclusion became important parts of Nepal’s development discourse and social contract discussion for the years to come.

From the streets of Chile to the traffic circles of France, people are demanding the right to contest and renegotiate social contracts. While we shouldn’t expect development research to predict the future, it needs to draw lessons from the past to inform the most effective actions to help countries address present and future development challenges. The World Bank and others can derive much value from social contract diagnostics.

What social contract between…

What social contract between the World Bank Group and all those poor countries that it assist???