Is Budget Support an Endangered Species? Why giving cash directly to developing countries may (still) be a good idea.

Is Budget Support an Endangered Species? Why giving cash directly to developing countries may (still) be a good idea.

A number of recent studies by IEG and the European Commission provide evidence of the positive impacts of general budget support, as well as insights into why in some country cases it has failed. 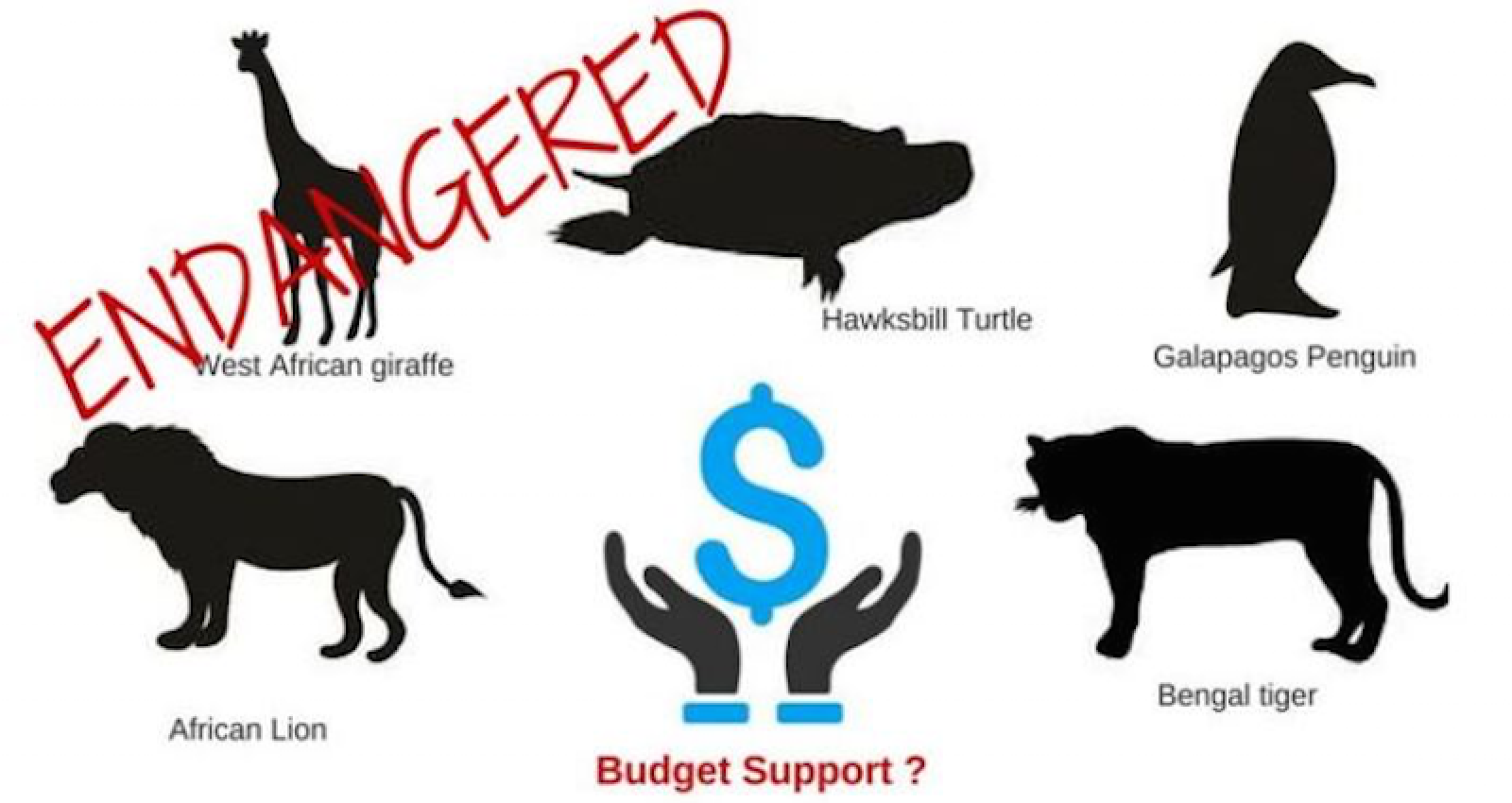 Should the World Bank and other development partners give money directly to developing countries or is it better to channel these resources to defined projects, for example, hospitals and schools?

Since the early 1980s, the World Bank has provided over $300 billion in budget support to governments around the world. Over the last decade, budget support averaged about a quarter of total World Bank financing.  Demand peaked during the global financial crisis, then declined, but has recently surged again, driven by the global economic slowdown and the impact of falling commodity prices. Ghana and Egypt recently signed large DPF loans with the World Bank ($550 million and $1 billion respectively --their largest ever).  And last month, Nigeria was reported in the Financial Times to be seeking $3.5 billion in emergency loans from the World Bank and African Development Bank to help fund a $15 billion deficit on the back of low oil prices and a government stimulus program. 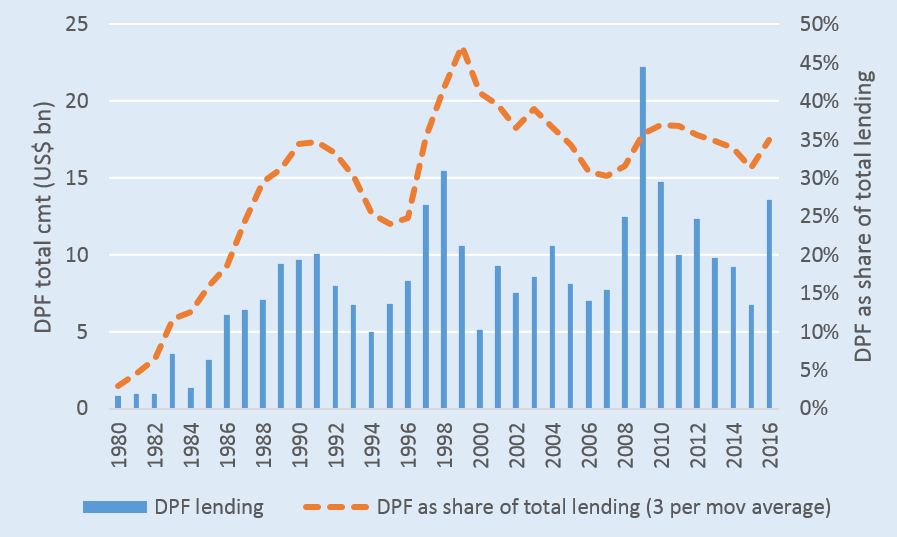 In contrast to the World Bank, many other development institutions and donor governments have either withdrawn or significantly curtailed their budget support contributions. These include Denmark (Danida) the European Community, France (AFD), and the United Kingdom (DFiD),

This shift has occurred over several years. In 2011 the former head of the Overseas Development Institute lamented that budget support had become an "endangered species". Gone is the optimism of the early 2000s and the Paris Declaration, which seemed to herald a new era of flexible, predictable, and country-owned financial aid.

A history of controversy

Arguments against budget support have varied over time but center around three concerns.

One is that budget support is inherently fungible, which means it can potentially be used for purposes donors would not support.

Secondly, critics argue that it is more susceptible to diversion towards corrupt purposes, given that many of the recipient countries have weak financial management practices. Put simply, budget support is viewed as "throwing good money after bad" - financing wasteful consumption or low valued-added activities.

The third concern is that budget support is much harder to justify politically in the donor countries. Giving "cash for reform" is a much tougher sell than providing support for maternal and child health care or infrastructure.

Proponents of budget support question these arguments and point to several attractive features, some for precisely the reasons others distrust it.

Proponents further argue that while budget support undergoes more intensive scrutiny than general investment projects, it nevertheless tends to be a more efficient aid instrument. It generally costs less to prepare and supervise budget support per dollar loaned, disburses quickly, and is likely to get more into the economy for each dollar lent (less is likely to be spent on imports and foreign contracts).

Thirdly, it is argued that budget support is an important lever for policy reform. By supporting and influencing ("nudging") government policy, budget support contributes to how institutions operate and how business is done, with more far-reaching and fundamental impact than other forms of aid.

What does the evidence show?

What is missing from this debate is objective evidence on what is being achieved with budget support. Such evidence should inform public decision making, particularly when it comes to allocating scarce public funds.  What is driving good and bad experience, and what is the evidence on results and impact?

How budget support works to achieve stated objectives is highly context specific. Recent studies by the Independent Evaluation Group and the European Commission, however, provide evidence of the positive and negative impacts of general budget support, as well as insights into what drives performance in different countries and contexts.

IEG's own review of the World Bank's budget support/DPF programs showed that DPF performance is at levels equal to, or somewhat above, what is found in investment projects. 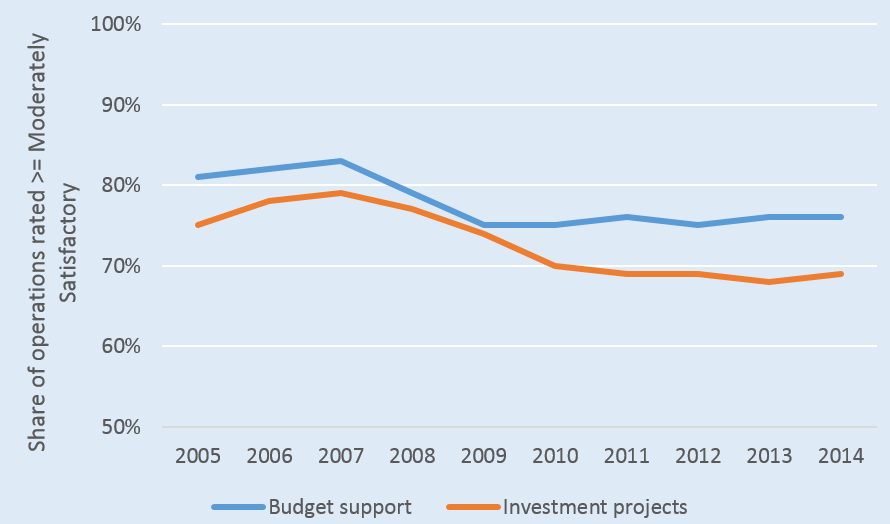 IEG's research further looked at how design and execution of budget support can influence performance. Here are some initial take-aways from this work.

In a series of forthcoming blogs we will address the evidence emerging on what works better or worse in budget support programs.

Evaluation jointly managed by the European Commission (DG DEVCO Evaluation Unit) and the World Bank's Independent Evaluation Group (IEG) with the Government of Uganda (Ministry of Finance , Planning, and Economic Development, and Office of the Prime Minister), Ireland (Department of Foreign Affairs and Trade) and the UK (DFID)

With all respect to IEG findings, I find it hard to see where the evidence is coming from. If the idea behind the budgetary support is to strengthen institutions and "nudge" the governments towards the right policy, why then are the recipient countries fail to improve governance and time and again seek budgetary support. One would imagine that difficult fiscal situations would given enough incentive to countries to reform themselves without any "nudging", but the very fact that this an argument used for the budgetary support means that the governments are not inherently committed to reform. The reason behind the wide use of budgetary support is in it simplicity. These projects relatively inexpensive and quick to prepare, are large in size, and disburse immediately. In an environment where lending numbers matter, DPFs are heaven sent. If the idea was simply to support the governments in reform, this can be done through providing expert advice, not money. In my view, investment focused funding is much superior as at the end there are some tangible results. The investment projects as undertaken by the Bank have many issues (mainly lack of commercial focus and poor management), but they too can be used to "nudge" and get the right policies in place. In the case of budgetary support, the money is simply lost.
Interesting .. Look forward reading the forthcoming blogs ..
Very interesting to open this discussion among staff. I don't think we should oppose investment lending versus DPFs. These two instruments are more than complementary and reinforcing each other. In much of the countries where I worked, both instruments are needed in order to achieve development objectives, especially when it comes to institutional strengthening. You need to "nudge" government (and more often entrenched bureaucracies) toward some hard reforms and at the same time, you need to get expert advice and technical assistance to see some reforms successfully completed.
I don´t have much information about the outcomes of budget support in development countries, but the only experience I had in Mozambique I had some evidence that most of this money went to private business of politicians or even though to personal issues of the members of the government. Nevertheless, it is also true that in many cases, the other financing tools do not achieve their results, sometimes you don´t see almost anything after many thousands of euros and /or dollars invested, and there will not be almost any impact on the quality of life of the population of these communities. Maybe we should ask ourselves not only if the tool is the best one but also if we are using the best channels to fight against the roots of the underdevelopment.