How to maximize impact of development policy financing in a rapidly changing country context: Lessons from Burkina Faso

How to maximize impact of development policy financing in a rapidly changing country context: Lessons from Burkina Faso 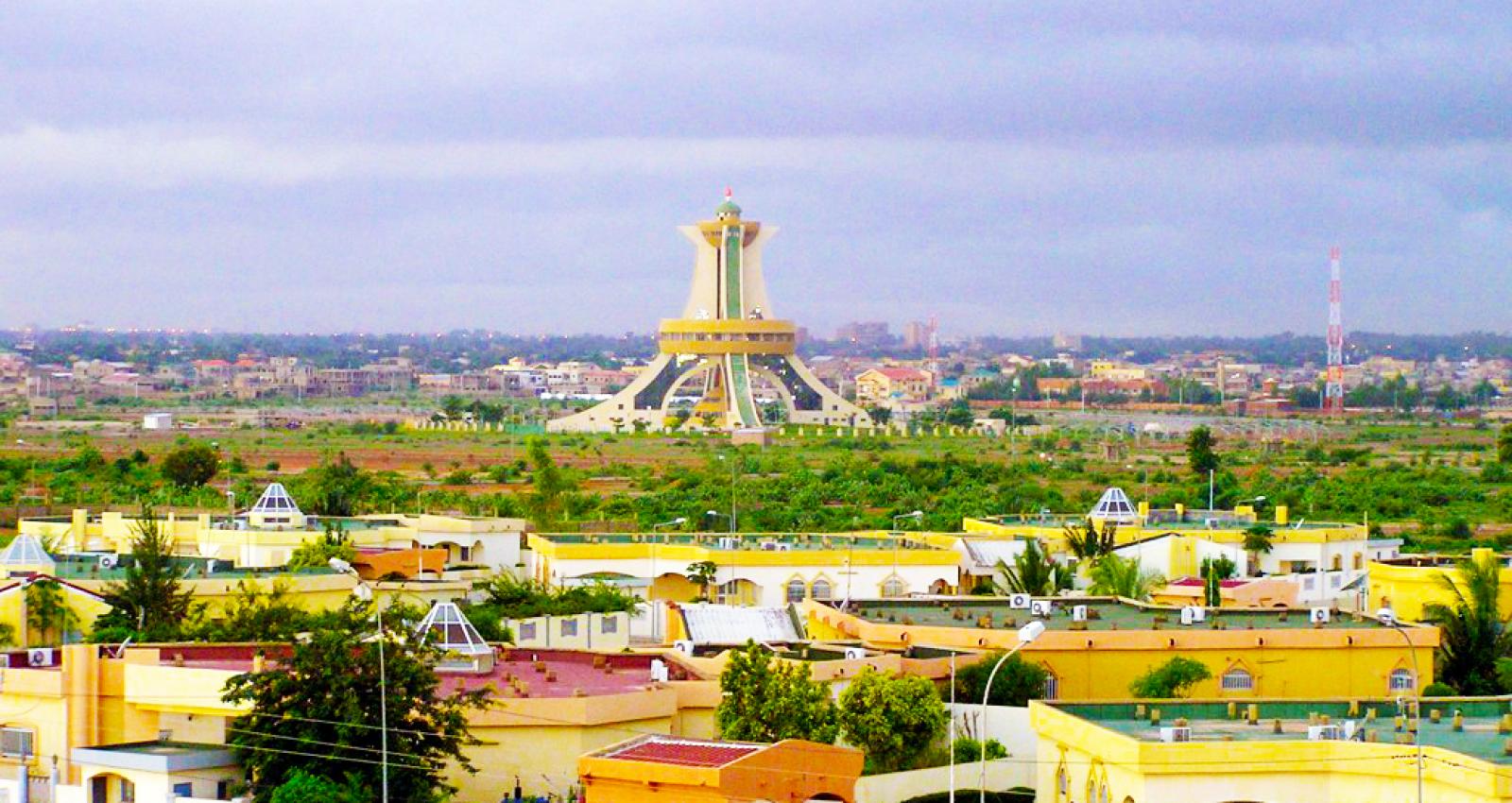 The choice of a programmatic DPF instrument was inappropriate in a challenging environment characterized by significant political turbulence and instability. The design was insufficiently flexible to react to shocks and covered too many policy areas.

Development policy financing (DPF) is a form of policy-based loan that that provides budget support to a World Bank client country while supporting policies that promote growth and poverty reduction.

For the recent evaluation Maximizing the Impact of DPF in International Development Association (IDA) Countries, IEG conducted desk-based case studies and an extensive review of literature to identify design and execution specific factors that contribute to the success of DPFs in IDA countries. First and foremost was the need to adapt the operation to the specific country context.

Why does the country context matter for successful reform?

The World Bank’s decision to approve a DPF operation is based on the assessment of a country’s policy and institutional framework, including the macroeconomic framework, governance, environmental management, and poverty and social considerations. Countries are required to demonstrate a commitment to their own reforms and implement the proposed policy measures agreed with the Bank. The Bank assesses the adequacy of the macroeconomic policy framework before approving development policy loans.

However, country context can—and often does—change right from the moment these assessments are made, meaning that changes will need to be constantly monitored throughout the life of the DPF operation.

Some changes may be small, while others are more impactful, unplanned events (such as coup d’etat or natural disaster); often the changes are of a prolonged nature (e.g., conflicts).  In the case of an evolving crisis, the institutions of government tasked to implement DPF-related reforms may decide to re-prioritize policies based on rapidly changing needs. When a country’s vulnerabilities change, the context has changed.

The context of reforms for Burkina Faso’s Growth and Competitiveness series (i-iv), 2012-2015 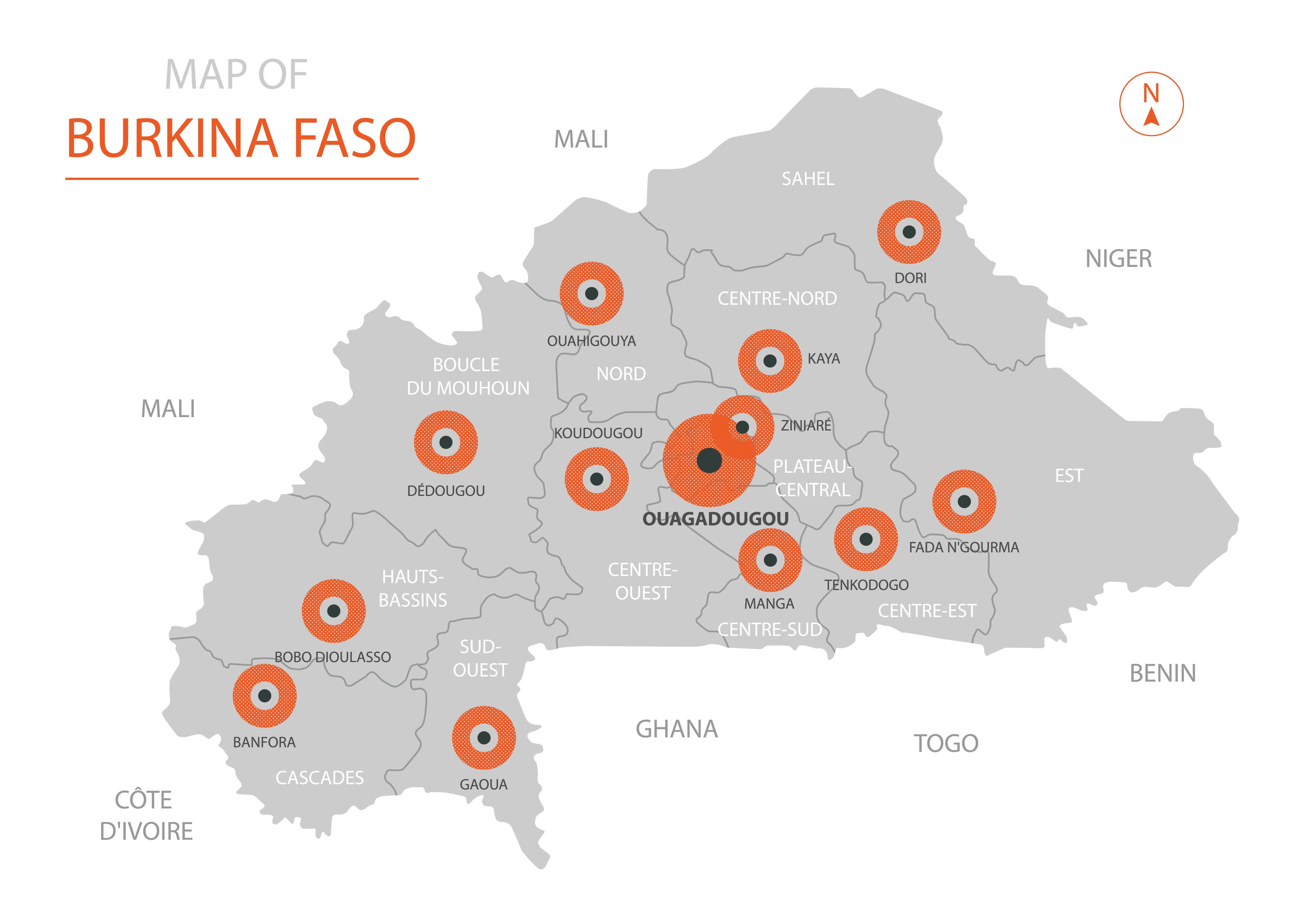 Burkina Faso is a low-income, landlocked country with about 16.7 million inhabitants. It is vulnerable to large external shocks, resulting in part from the primary nature of its major exports (gold and raw cotton). Growth is hampered by natural and demographic factors, as well as weak governance. In addition, sub-optimal policy choices and institutions constrain economic performance.

The country was politically stable for over two decades until 2011. Prior to 2011 Burkina Faso moved away from a centralized economic model toward market-oriented reforms and re-engagement with the international community.

After 2011, a series of domestic protests and political unrest complicated implementation of needed policy reforms. The country suffered a political crisis that led to the removal of the president in October 2014 and installation of a transitional government, which itself faced an attempted military coup in September 2015.

“Sahelian attacks” led the government to increase its security budget by an estimated 40%, while the 2012 Sahelian food crisis led to an inflow of about 100,000 Malian refugees into the country.

The government requested a World Bank program to help improve transparency and accountability in public resource management, help catalyze private sector investment and increase resilience to shocks. However, the changing country context, coupled with inflexibility in the design of the program in the face of unanticipated shocks, staff turnover in the country office, and government challenges in implementing agreed reforms, resulted in an unsatisfactory outcome of the series. 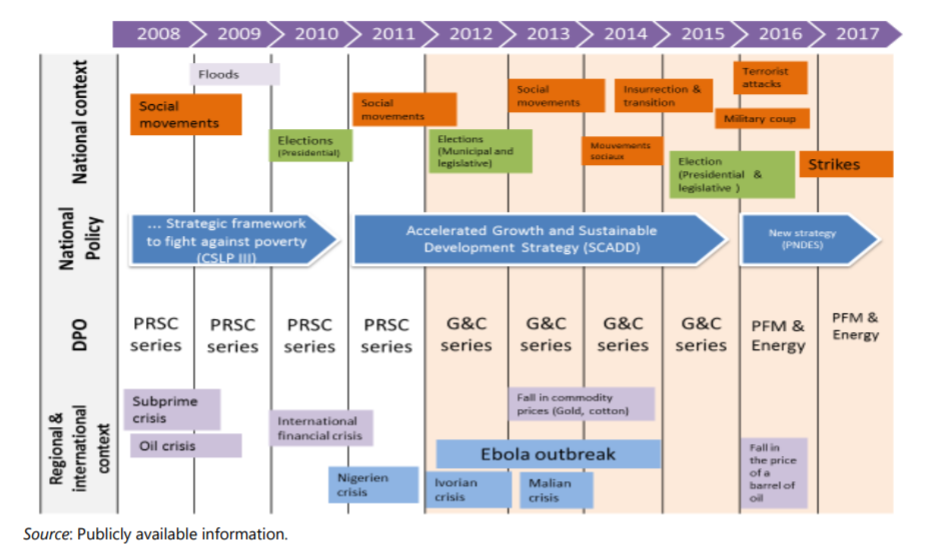 What could have been improved?

Given limited implementation capacity, program design could have been made simpler and reforms better focused. The choice of a programmatic DPF instrument was inappropriate in a challenging environment characterized by significant political turbulence and instability. The design was insufficiently flexible to react to shocks and covered too many policy areas. The series supported the completion of reforms from previous series at a time when the country context had begun to deteriorate, and earlier gains had been eroded. Objectives were formulated differently under each operation in the series creating some confusion within the government. This, together with the breadth of the objectives, made it difficult to establish a clear priority of the operations. Many of the prior actions supported were too weak to achieve the stated objectives. Some prior actions were reversed and had to be repeated during the series.

In an environment of constrained capacity, focusing on fewer policy areas is better than tackling many challenges at once. Quality at entry of the operations was undermined by attempting to tackle too many unrelated policy areas, in direct opposition to the past lessons learned and the recommendation of the Country Assistance Strategy. Risks were identified but inadequately mitigated. Supervision did not address pertinent issues in a timely manner. The technical assistance provided was not sufficient to address capacity weaknesses.

What lessons can the World Bank learn from the Burkina Faso experience?

When political risks are high and capacity is strained, design is better focused on a few key priorities. This series covered too many areas, and some key binding constraints were not addressed. The series might have been more successful with a sharper focus on more realistic objectives accompanied by a simpler design.

The success of budgetary support depends on the suitability of the instrument to the country environment. In a context of political turbulence and uncertainties about the government’s ability to undertake longer term reforms, the World Bank could have ended the programmatic series after the third operation. Alternatively, the Bank could have implemented a series of Standalone operations after the second programmatic series when it became apparent that the political and policy environment was rapidly changing.

Lack of clarity on the respective roles and responsibilities of central and local governments and of the private sector undermines policy actions. It is important to ensure that there is a shared vision and that the need for reform is recognized and accepted by all parties. In this case, there was a lack of clarity among different stakeholders during implementation of the reforms on decentralization and fertilizer distribution.

When monitoring and evaluation (M&E) is not adequately resourced or implemented, there can be delays in the identification of problems and the application of remedies. M&E weaknesses can be compensated by leveraging information available elsewhere, or through specific impact assessments and perceptions surveys.

There may be a trade-off between the promise of continuous and predictable financing, urgently needed in times of crisis, and the strength of the reform program. In Burkina Faso the emphasis was on continuous financing even when reform performance was waning.

The lack of broad consultations with stakeholders when designing a complex reform program could undermine results. In this case, the lack of consultations with an important stakeholder association (the Confederation Paysanne du Faso) on fertilizer distribution affected the achievement of results of one of the first objectives. Also, some development partners and civil society organizations had limited knowledge of the reforms pursued in the Growth and Competitiveness series.

Inadequately resourced implementing agencies will likely be unable to carry out agreed reforms. Under-resourcing may indicate low government commitment, which needs to be addressed through policy dialogue. It is also important to ensure that agencies have appropriate technical capacity and systems in place, and that potential political obstacles at the local level are being addressed.