In a recently published Op-Ed in the Diplomatic Courier, I argued that while parliaments and parliamentarians continue to play a vital role in functioning democracies more than a millennium after the first such body was established, their role could be made even more effective if there was a greater embrace of evaluation.

The debates and decisions of parliamentarians should be informed by evidence from experience. If a program has produced expected results, should it continue, can it be repeated or expanded? Has a policy contributed to greater equity or heightened inequality and, if so, what corrective measures are needed? And, what better way to hold government accountable than an impartial assessment by evaluators that draws on feedback from stakeholders, including those who voted parliamentarians into office and are affected by their actions.

Yet, few countries have well established evaluation systems. And what is evaluated often relates to assistance provided by multilateral and bilateral partners who evaluate results and performance.

As the relative importance of official development assistance diminishes as a proportion of total flows for development, the reliance on these evaluations is insufficient. Instead, evaluation systems need to be able to assess the collective effects of resources for development - domestic and foreign, public and private, trade, aid and investments. Governments and parliamentarians alike should have an interest in understanding whether these monies propel development outcomes and who benefits from them.

So, if evaluation is such an important part of good governance and a crucial part of the healthy debate in the institutions of democracy, what do parliamentarians need to do?

I believe they can play a crucial role in three ways:

By promoting an evidence-based discourse in their debates. Parliamentarians should recognize the importance of using evidence to inform decisions – be they on adopting legislation, approving budgets, or debating government performance in delivering against promised development results.

By being discerning consumers of evaluation. They need to be discerning users because not all evaluations provide as strong or sound an evidence-base as they should, sometimes because their methods are flawed, but more often because the data is insufficient to be conclusive.

By safeguarding the independence of evaluation. Parliamentarians can do this by ensuring that at least part of the evaluation system is safeguarded from undue influence with reporting lines to them rather than the administration, and with independent appointments and resources. 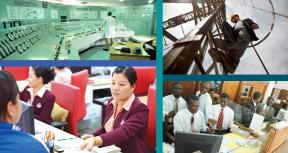